Both Mr ShoeThatAlwaysFits and I have been ill with a glandular fever-esque virus for a few days.  It sucked.  We got snarky, over-dosed on Season 4 of The Good Wife and I slept more than I have so far this year.

I attempted to go to work on Monday – I managed a little over two hours in situ, but with my tolerance levels at an all time low I thought that I should leave before I started on a squeakily terrifying laryngitis riddled tirade of abuse that was bubbling up inside me.  I made it home, Mr ShoeThatAlwaysFits saw my sweaty little face and attempted to cheer me up by liberating the shoes I bought in London.  They were were hostages for over a week and he wanted some thanks.  I think not !

I made it in today, called a few clients, dealt with an alarming amount of emails and boxed up and returned some little parcels of loveliness that weren’t quite right.  I’ve come home, tackled the ironing, done the dishes, made some calls, and done some jobs for Mr ShoeThatAlwaysFits for his early start tomorrow.  In short, I’ve achieved more in the last 14 hours than I have over the last 5 days.

It’s good to have a bit of a spring back in my step, and I’m feeling a lot more like my old self. 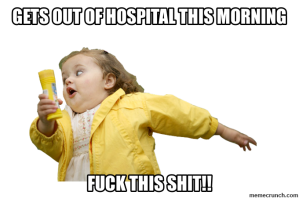 2 comments on “Down, not out, and back in the game”